Nissan Flex Their Conceptual Abilities With The 370Zki

With the Chicago Motor Show just around the corner, Nissan have unveiled their latest bonkers concept, designed to tackle treacherous snowy terrain! The 370Zki (pronounced 370 Ski) was built using a 370Z roadster, adapting it for use in the harshest winter conditions typically found in the Rocky Mountains or other winter sports hot spots around the world. The 370Zki will be making its international debut at the 2018 Chicago Motor show.

Having sacked off the conventional wheel, Nissan have added the tank style Dominator tracks planting the power from the cars 3.7Litre V6 engine at the rear, with large ski's at the front to battle the terrain and keep the 370 facing the right way! To minimise wheel? No, track spin..! the car uses a 7 speed automatic transmission.

Many customisation's were made to alter the drive train to suit the new set up, but amusingly the standard front calipers and disks remain, despite having absolutely no use at all... Other changes include new suspension mounts for the suspension, thee-inch spacers

For those of you thinking that the 370Zki would be just the ticket to attack the UK's immense 3cm snowfall each year, unfortunately they've only made one, and it's likely to stay that way. 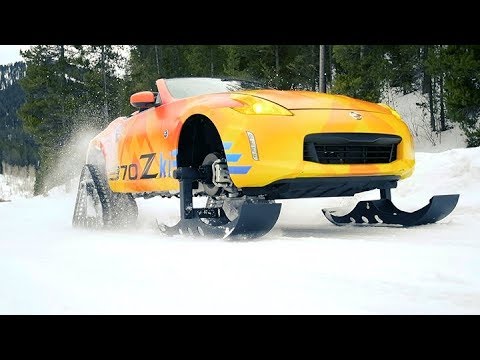