The GT-R50, a futuristic adaption of the Nissan GT-R by Italdesign debuted and driven this month at the Goodwood Festival of speed. A concept built to celebrate 50 years of both the GT-R name and Italdesign.

Since it was released online a few weeks back, Nissan confirmed that the car may actually come into a very limited run production of 50 units. Whether the comes to production or not lies pretty much in the hands of the public. If given a ecstatic reception by the general public, 50 lucky owners around the world will have their GT-R50.

The GT-R50 has been tuned to push out 711bhp thanks to competition spec turbo’s, bigger intercoolers, a stronger crankshaft, reinforced pistons, con-rods and bearings as well as a new exhaust. The twin-turbo V6 powerplant pumps out 575lb ft, all through a six-speed dual clutch transmission.

In addition to the engine and body style upgrades the GT-R50 has been treated to Bilstein suspension and 21” carbon fibre wheels. Overall the GT-R50 sits 54mm lower than the regular car.

Thanks to these upgrades and the vibrant gold bodywork, the car is expected to go for around €900,000 should it reach production.

If you could, you would though? All that gold! 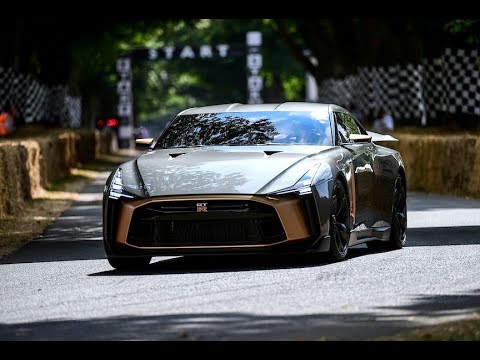