Severn Valley Motorsport, a U.K. based company specialised in tuning Nissan GT-R's, built an 1,100 HP first generation Qashqai back in 2014 and named it the Qashqai-R. Since then the Qashqai has had a series of revamps and the tuner says that the cars "heavily forged engine" now features an advanced turbo kit, allowing the car to push out 2,000-HP.

This isn't the only Nissan to be gifted the GT-R's incredible engine. Nissan built two crazy Nissan Juke-R's a few years back, and even took it into production at briefly, at an extortionate price.

The latest Qashqai-R has been built to reclaim SVM's crown for the worlds fastest SUV, an accolade held previously by Toyota's ridiculous 2,000-HP Land Cruiser and its top speed of 230 mph.

This past weekend at an event on a private two mile runway, the Qashqai managed to hit an incredible 237.8mph (382.7 kph) A speed that not even a Koenigsegg Agera RS could beat on the day (221.3 mph). 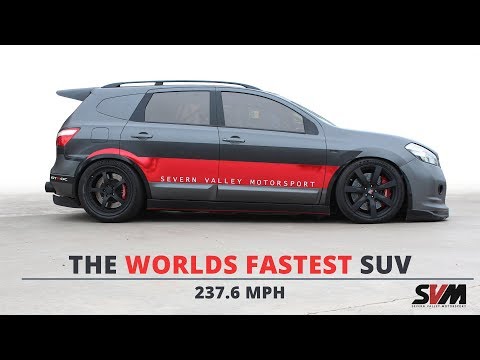