Why Fans and Critics Rate the Civic Type R

Type-R stands for ‘racing’. Honda’s engineers set out to develop a racing car for the road, one that would give drivers raw thrills and an immersive experience. They succeeded. The first Type-R impressed even one of the world’s greatest racing drivers - Ayrton Senna.

In 2001, a new hot hatch pulled up at the start line in the race for Britain’s driving enthusiasts. The Honda Civic Type-R was based on what was known as the EP3, and Honda announced its arrival with the cheeky advertising line, Bye Bye GTI. peace, GTI

Reviewing it at the time, Richard Hammond said: “Straight away this feels a world apart from some so-called hot hatches… it feels very close to a race car on the road.”

And Top Gear Magazine named it their 2002 Hot Hatch of the Year, saying “it’s capable of generating levels of grip that rattle your brain…immature, yes, but we like it.”

The beating heart of the first Civic Type-R was its four-cylinder petrol engine, a 2-litre, naturally aspirated motor with a red line of 8,000rpm. Autocar described it as “one of the most exhilarating and satisfying drivetrains of any car currently on sale, irrespective of price.” They went on to draw comparisons with engines from expensive sports cars including the Ferrari 360M, Porsche 911 GT3 and BMW M3 CSL.

With a completely new look and wheels pushed out to the furthest corners of the car, the 2007 Civic Type-R showed how Honda was continuing to challenge convention.

Top Gear described its styling as a ‘spaceship outfit’ and later models even came with a limited slip differential, to further enhance the road-holding of the super-hatch, known as the FN2.

Moved by the Mugen

Honda and Mugen, the tuning company from Japan, cooperate on a series of Civic Type-R models, culminating in the deliciously wicked ‘Mugen 2.2’, of 2011.

Compared to the standard Civic Type-R, power and torque increase by 30 per cent, the suspension and brakes are reworked and a striking bodykit show it’s an adrenaline rush on wheels.

Honda’s engineers called it the FK2 but fans called it the ‘turbo rush’. This was the first turbocharged Civic Type-R, and it quickly set new standards, with a world record for the ‘fastest lap time in a front-wheel drive car’ around Germany’s Nürburgring racetrack. Faster, even, than a Lamborghini Gallardo supercar with a V10 engine and four-wheel drive…

With 306bhp, and 295Ib ft of torque, plus a limited-slip differential to enhance the front wheels’ traction, it was the fastest Civic Type-R yet, charging from 0-62mph in just 5.7 seconds and going on to a top speed of 168mph.

For the 2017 Civic Type-R, Honda’s engineers had a simple objective: create a hot hatch that would be the fastest front-wheel drive car around the 12.9 mile Nürburgring. Last April, it delivered the goods, completing a lap of the torturous track in 7m 38s.

It has since set lap records at Magny-Cours, in France, and Spa-Francorchamps, in Belgium. Next on the list of record-runs are Britain’s Silverstone, Estoril in Portugal, and the Hungaroring in Hungary. Watch this space

After driving the 2017 Honda Civic Type-R, for BBC Top Gear, Chris Harris declared: “You get in it and you grow horns!” 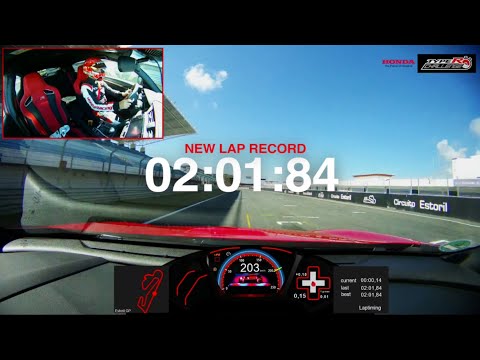